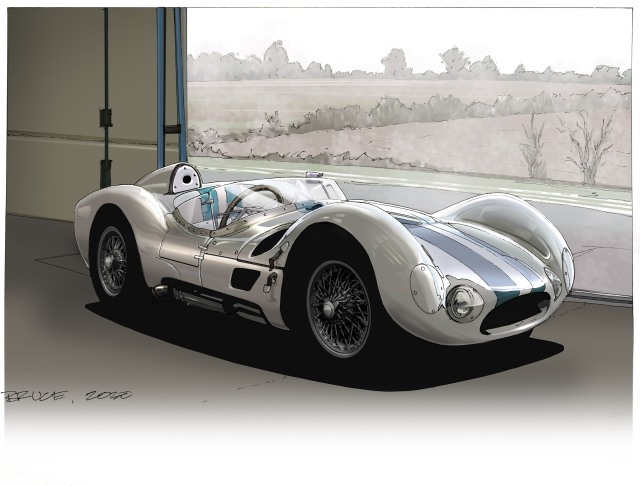 This was supposed to be a quick sketch and render but became a little more complex – but let me start at the beginning. In 2005 I was living in England, and a very close friend of mine was doing some work for Maserati which included going up to the Cotswolds to interview Nick Mason about his Ten tenth collection which included  a Maserati 250F F1 car from the fifties and this Maserati Birdcage. My friend was kind enough to invite me along on this jaunt, and although I didn’t get to meet Nick Mason (Curses!!!) as this trip was to get photographs, I did get to toddle through his amazing collection. Nick Mason’s collection was in a hangar and the Birdcage had been pulled out to sit front and centre and the door raised to let some light in. I should mention that it was November, and I was seeing the first snow that actually accumulated on the ground in England in this very slightly northern (compared to London) area southeast of Wales.

The car was white with Prussian Blue racing stripes and this made for a tricky render – white cars are always hard to render (because in practice, there is so little “white” involved). The light was low and filtered through cloud cover and I wanted to capture the bleak weather in the image.

This is the only Maserati Tipo 60/61 that I have ever seen in the flesh. Not surprising really as there were only 23 ever made (16 +1 of the Tipo 61s and 6 units of the Tipo 60). These cars were raced in the Targa Florio, the 1000km of Nurburgring and the 24 Heures de le mans amongst others. It was a real privilege to be able to view one in person. 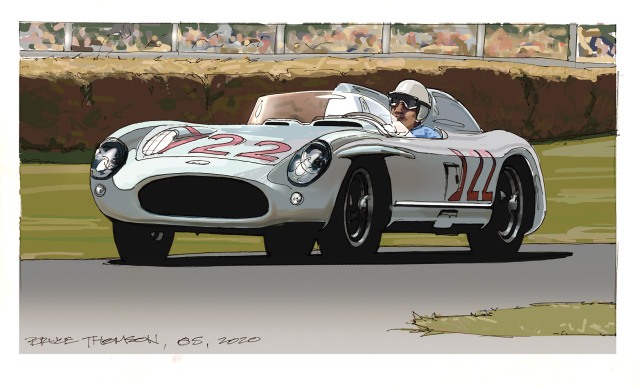 A belated tribute to one of my favourite drivers. I sketched this from a photo I took at the 2005 Goodwood Festival of speed, at which Stirling Moss piloted his legendary Mercedes 300SLR up the course. Racing is diminished by his passing.

This took me a little longer than expected, but I finally got it done. A tricky piece. 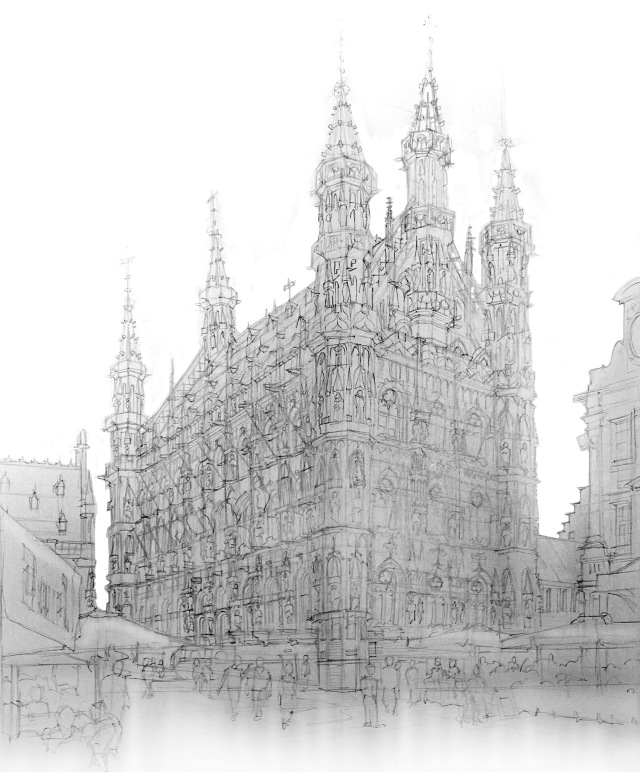 Apologies for the muddled presentation – this is a pencil sketch just about ready for penning. I don’t usually spend this much time in preparation for a sketch, but I knew that this was going to take time. I think I took the photo back in 2017, and it’s complexity may be one of the reasons I’ve waited so long before starting it… 🙂

Seems I have a little more time now though, so…

Ages ago (2014 I think) – I did a sketch for a friend of a Moto Guzzi 850 for a friend of his (inset sketch, lower left) . I was looking for some larger paper to sketch on recently and found these sketches that I had forgotten in a large sketch block I had unpacked from my recent move. I’m amused to see that, obviously, I had imagined that a lower viewpoint of the bike would be better, but later chose the (better, I think) higher view so that I could show some background. You can see the quick proto-sketch for what would be the final at the top, 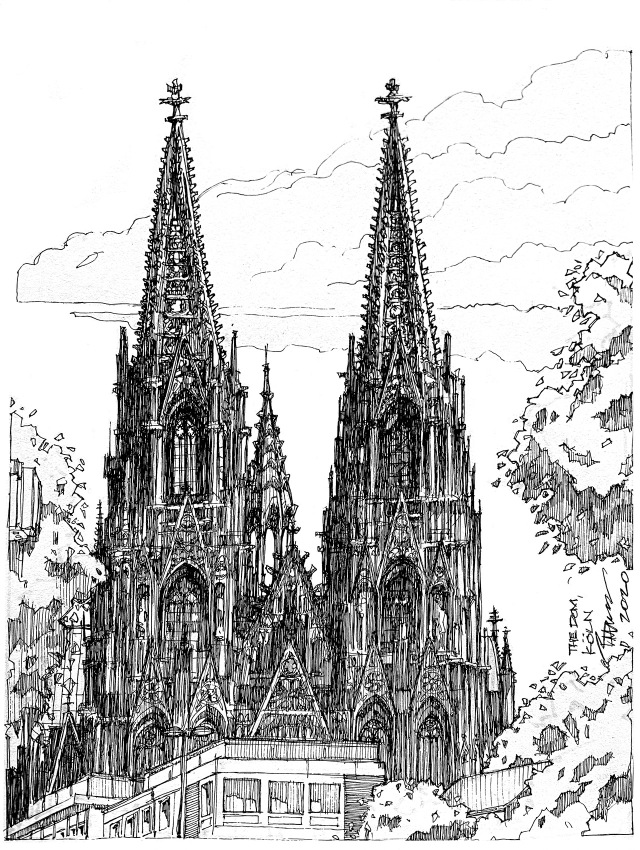 Evelyn and I used to live quite close by to the Dom, and I took numerous photographs of it at the time as I thin k it’s an amazing building. I was looking through all of my old photos last week and decided I would start to catch up on some of the drawings I had intended to do and never got around to. This sketch was better to do from a digital photo then in life, as, iirc, I had to step into the middle of the street to get this view.

A sketch I did from a Patio in the Rua Agusta in Lisbon. This was nearly 2 years ago, and I never got around to posting it. The subject matter was tricky and took a little longer than most of my sketches because of the complexity of the architecture. Definitely a 2 pint sketch!

Catching up… a sketch from British Car Day last September (!) of a lovely Jaguar XK120 with a gaggle of XJSs in the background.

Very cool and slightly beat up Land Rover from British Car Day this past September.

Apologies for the hiatus between work – I’ve been away and for various reasons was not submitting on the fly. Regardless – Evelyn and I were in Malaysia and Cambodia and I’ll start with the most obvious – a sketch of Angkor Wat. Amazingly impressive, and – being there in the off season it was less busy than I had expected. The weather though, was enervating. We’d already been in Kuala Lumpur for a week and a half when we headed off to Siem Reap, but nothing could prepare us for the oven that Cambodia was! We spent about 2 and a half hours in Angkor Wat, and would have liked to have spend more time but the heat drove us back to the AC in the car… 🙂