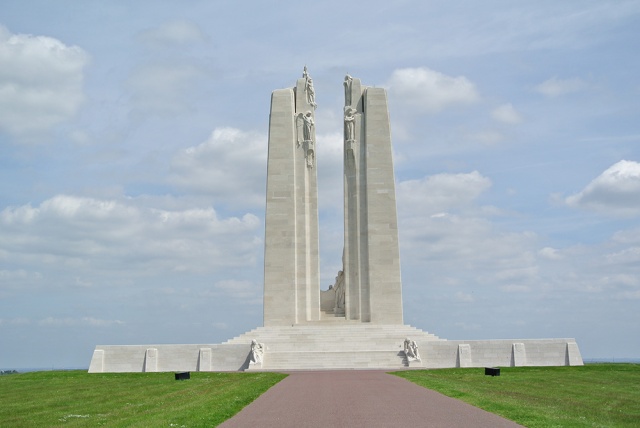 I didn’t want to draw this. I’ve been wanting to go here for the last couple of decades, and here I was. Vimy. It is an outstanding memorial. “Awesome” in the sense that the word used to be used.

I was there with a couple of Malaysians, a Belgian and a Brit and they were surprised at the “ra ra” aspect of the place (not the cenotaph, {pictured} ) but the “welcome centre” and the trenches and the tunnels…) So was I, to a degree – “Ra ra”, is not a Canadian virtue. (In fairness, the Belgian kept saying “ja – this is war…”

They pointed out to me that the Canadians attacked the Germans in overwhelming force and that as many Germans died as Canadians.

I don’t disagree. I’ve read “Westen Nichts Neues”, and watched “a midnight clear”. I don’t differentiate between combatants. But the Canadians had to jump over the trench into machine gun fire (As the Australians had had to do at Gallipoli). But the Canadians gained ground. In 2015, this is something to feel guilty about, apparently. I only felt pride. I mourn the deaths of the poor Germans mired in the mud, unsupported by the proper response. But I also applaud the incredible courage and valour of a group who didn’t know how things would work out.

This is a sketch blog. But a sketch would not do this justice.

This entry was posted in Uncategorized. Bookmark the permalink.